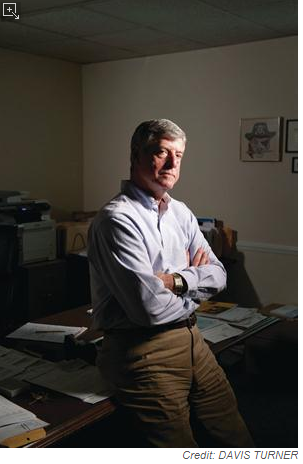 In January, Frederick Judson began his one-year term as chairman of the NAHB. That post is the culmination of Judson’s longtime involvement with the Washington, D.C.–based trade group, on whose board of directors he first served in 1979. Judson also has been a member of NAHB’s executive board since 2002.
The 63-year-old Judson, who goes by Rick, brings a unique perspective to the chairman’s position. He has been in the housing industry for more than 35 years, first in his family’s insulating contractor business, and then as a real estate developer and builder. Judson currently owns Evergreen Development Group in Charlotte, N.C., and among his recent projects is a 174-unit townhouse community for which Evergreen has 24 units to complete.
Judson’s community and philanthropic activities have included his participation with the Sertoma Club, a quality-of-life organization whose particular advocacy is for the hearing- and speech-impaired. In 1985, Judson received North Carolina’s highest civilian honor, the Order of the Long Leaf Pine.
On Dec. 13, Judson spoke with BUILDER and shared his thoughts about the factors that could impact the housing industry’s recovery, positively or negatively. Below are excerpts from that interview, which revolved around the following topics:

“No. 1 is to make sure the recovery continues,” Judson said. “We’re gradually pulling out of this recession, and we need to make sure that [lawmakers] are fed accurate information so they can make intelligent decisions.” The areas of greatest concern for the NAHB, he noted, include the fate of the mortgage interest deduction, foreclosures, and home buyers’ access to credit. The NAHB also will continue to hammer home the connection between a strong housing market and the nation’s job growth.

While housing was barely mentioned by either candidate during the recent presidential campaign, the industry is always under the watchful eye of Big Brother. That irony isn’t lost on Judson. “We are a large target and continue to fall under the regulatory microscope.”
The NAHB has made its voice be heard on innumerable legislative matters such as the mitigation of lead paint in buildings, companies’ tax filing requirements for part-time workers, and various building code changes that the association often believes are intrusive and cost-ineffective. “Some regulations go beyond the balance of energy, safety and what’s necessary,” Judson asserted. He pointed specifically to the association’s opposition to making the installation of sprinklers mandatory in new single-family construction, when “a lot of places don’t have the water capacity” to support such systems.
Judson emphasized that the NAHB is not reflexively against regulation, which “weeds out poor quality and unscrupulous builders.” He noted that NAHB’s green building program is the only one out there that supports building standards set by the American National Standards Institute.
Judson acknowledged, and at the same time rejected as erroneous, the perception in some quarters that builders and their trade group are obstructionists. “We have been very straightforward about this,” he explained. “If a regulation is put on us, we will pass it along and the consumer will pay for it.” Those pass-alongs, however, raise home prices and put ownership out of reach for some buyers. “And if you can’t buy that first house, I guarantee you will not buy the second.”
He sees NAHB’s role, then, as offering “pragmatic and logical” points of view that sometimes will be at odds with conventional wisdom or what consumers and politicians want to hear. “Someone has to give the other side of the argument,” he says.

Judson is taking the reins at the NAHB as demand for housing appears to be increasing. That trend, however, could be a double-edged sword for builders in certain markets who are already complaining about shortages of finished lots in prime locations and the scarcity of labor in some trades.
Judson didn’t dispute that land availability is a concern. He attributed the problem’s cause primarily to federal restraints on banks lending to real-estate developers at a time when pent-up demand for housing “could be staggering when lending and [new construction] present themselves.”
However, if and when the economy gets stronger and the regulatory climate gets more commodious to home building, there could be shortages in labor and materials, according to Judson. So many manufacturing plants closed during the recession, and “it will take a while for suppliers to ramp up again.” In the interim, how much would home prices spike, he wondered?
What the NAHB is hoping will occur, he said, is that lawmakers and banks ease constraints on capital and mortgage lending gradually. Otherwise, “if you open the floodgates, there will be a rush” that the housing sector, in its current trimmed-down condition, probably couldn’t handle at first.
The labor issue, however, transcends the immediate economy. Since peaking in spring 2006, employment in the construction sector has fallen by 2 million people. More problematic, from builders’ vantage point, is the perception among younger workers that the housing industry is too “stagnant” (Judson’s word) to offer reliable or interesting job opportunities.
The NAHB, Judson said, is doing what it can to change that image. Its Home Builder Institute has student chapters across the country. The association funds or contributes to construction management programs at many universities, at which there’s “a growing demand” for that degree, explained Judson (who earned a bachelor’s degree in business and history from East Carolina University in Greenville, N.C.). “As the economy improves, we think that people who are being trained will recognize the industry’s employment opportunities,” which Judson said aren’t confined to construction but also encompass development and property management.
“We encourage this, and support it economically.”

It’s anyone’s guess just how many builders closed or went bankrupt during the past recession. Suffice it to say that the industry’s ranks dwindled significantly. Some of those builders have since gotten back into the game under new names and unencumbered by underwater legacy assets. But where does the NAHB fit in with this new group, and can the association recapture enough membership to maintain its clout?
Judson is convinced that builders would come back into the market in larger numbers once there’s evidence of a “booming economy and strong consumer confidence.” He also believes that there continues to be a “social fabric” associated with owning a home, and therefore a “recognized value” in building houses. That value, he contends, extends to belonging to an association like the NAHB whose influence runs across local, regional, and national strata. “We’re our members’ spokesperson on all three of these levels,” he said.
FIND OUT MORE!
Grand Banks
978-281-2421

We’ve been hard at work behind the scenes, and we are beyond excited to finally be able to tell you about it. This past year, we had the opportunity to work with Jonathan Knight, of New Kids on the Block and local interior designer Kristina Crestin on the new HGTV show Farmhouse Fixer.
Read More

Replacing windows can be a cost-effective way to prevent this air loss and save on your overall energy bill.
Read More

10 Easy Ways to Show Your Home Some Love

All homes need a little TLC, and if you've been looking for ways to show your home a little love without undertaking a major renovation, here are 10 places you could start.
Read More