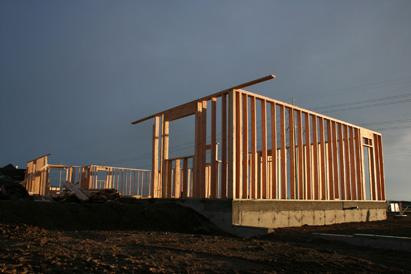 Builder confidence in the market for newly built, single-family homes improved for a fourth consecutive month in August with a two-point gain to 37 on the National Association of Home Builders/Wells Fargo Housing Market Index (HMI), released today. This gain builds on a six-point increase in July and brings the index to its highest level since February of 2007.

“From the builder’s perspective, current sales conditions, sales prospects for the next six months and traffic of prospective buyers are all better than they have been in more than five years,” said Barry Rutenberg, chairman of the National Association of Home Builders (NAHB) and a home builder from Gainesville, Fla. “While there is still much room for improvement, we have come a long way from the depths of the recession and the outlook appears to be brightening.”

“This fourth consecutive increase in builder confidence provides further evidence of the gradual strengthening that’s occurring in many housing markets and providing a needed boost to local economies,” said NAHB Chief Economist David Crowe. “However, we are still at a very fragile stage of this process and builders continue to express frustration regarding the inventory of distressed properties, inaccurate appraisal values, and the difficulty of accessing credit for both building and buying homes.”

Derived from a monthly survey that NAHB has been conducting for the past 25 years, the NAHB/Wells Fargo Housing Market Index gauges builder perceptions of current single-family home sales and sales expectations for the next six months as “good,” “fair” or “poor.” The survey also asks builders to rate traffic of prospective buyers as “high to very high,” “average” or “low to very low.” Scores from each component are then used to calculate a seasonally adjusted index where any number over 50 indicates that more builders view sales conditions as good than poor.

Every HMI component posted gains in August. The components gauging current sales conditions and traffic of prospective buyers each rose three points, to 39 and 31, respectively, while the component gauging sales expectations in the next six months inched up one point to 44. All were at their highest levels in more than five years.

Editor’s Note:  The NAHB/Wells Fargo Housing Market Index is strictly the product of NAHB Economics, and is not seen or influenced by any outside party prior to being released to the public. HMI tables can be found at www.nahb.org/hmi. More information on housing statistics is also available at http://www.housingeconomics.com/.