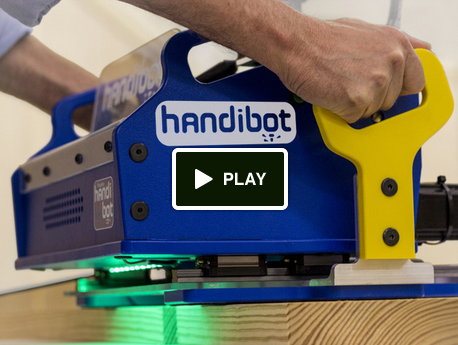 An innovative, portable tool run from apps on smartphones, tablets or PCs. Push-button CNC technology for jobsites and DIY projects!

How long will it be before robotic tools make their way to your job site?


It may not be as far off as you think thanks to a wildly successful Kickstart crowd-funding campaign. Meet Handibot, a smart digital power tool designed to run from apps on smartphones, tablets or PCs.

According to developers at ShopBot Tools:

A Handibot tool is a new kind of portable, digitally-controlled power tool for cutting, drilling, carving, and many other machining operations– a first Universal Digital Power Tool (UDPT) – or just, a Smart Tool. If you’re familiar with industrial CNC (computer numerically controlled) equipment, think of the Handibot tool as a portable version of CNC. But instead of taking material to a stationary machine, you bring the Handibot to your material — your jobsite, your remodeling task, your project, your work.

You can put your Handibot tool to work on a table, the floor, the ceiling, the wall, wherever you need to precisely cut, drill, or carve. Armed with a software application developed just for the kind of job you need to do, a Handibot tool is ready to go to work on your job, task, or project with a squeeze of the “Start” button.

Would you be willing to purchase and use a Handibot someday?