7 Lessons He Learned the Hard Way

Every remodeling business owner has learned painful lessons, and in his 29 years of running Winans Construction, a design/build firm in Berkeley, Calif., Paul Winans learned more than his share. For many of the early years (he and his wife Nina incorporated in 1978), he was a stubborn and hot-headed business novice who threw himself into his work and the impossible goal of pleasing every client and prospect.

Even as the business grew, Paul felt alone, frustrated, frightened and lost. Years of soul-searching included counseling, working with business consultants and "continuous epiphanies" about changes he had to make to his behavior and expectations. He had a much clearer perspective by mid-2007, when he and Nina sold their business and moved to Ashland, Ore., where he now consults through Winans Consulting and is a facilitator with Remodelers Advantage .

We spoke with Paul about his journey last week, in preparation for a presentation he'll be giving October 17 at The Remodeling Show in Chicago .See also this d5R profile of Paul from 2010, as well as last week's d5R Remodeling Show preview on the changing consumer .

1. Be honest with yourself

"I was not the person I wanted to be," said Paul (shown below in 1978). "I decided to stop being a prisoner of my habits and, among other things, believing that I could make all of my clients happy."

Pleasing everyone is impossible, of course, and when things didn't work out as planned — projects went over budget, clients became unhappy or even abusive — he found himself blaming others.

"If you're not honest with yourself, your motivation is misplaced," Paul said."You keep blaming others when the primary source of your pain and frustration is that the fact that you're not taking responsibility for the only thing you can control, which is your behavior."

Among the actions he took and recommends to other business owners:

Regarding the last point, an especially painful example was a project they took in the early 90s, when the Bay Area was still buried in recession. The job was referred by an architect who was no longer involved with it, was in an area where the company hadn't worked, and was for a couple who were equal parts condescending, cold and ultimately litigious. Red flags all around.

Setbacks didn't have to be crises, Paul learned over time. "I had to realize that everything is a journey, not a destination, and that just because I cared about something did not mean I should be devastated when it didn't go perfectly."

Along the same lines, Paul learned to not expect perfection. "Life happens, and the truth is that being a remodeling contractor hinges on reducing surprises as much as possible. You'll never eliminate them," he said.

In the video below, he discusses how systematizing sales can help to minimize surprises involving inadequate lead flow and poor matches for your company. 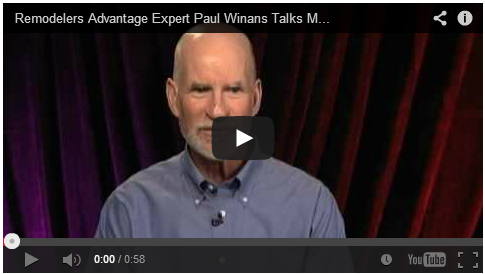 4. Focus on the positive

As many remodelers have learned from reviews on sites like Angie's List and Yelp, homeowners often focus far more on what goes wrong than what goes right. Don't make that mistake with your business.

"My struggle was to only see what was not perfect," Paul said. "I actually put reminders in my schedule to 'praise somebody' and 'place no blame.'"

From underestimating project timelines to overestimating homeowners' understanding, mistakes are inevitable in remodeling. "It took me a while to accept that," Paul said. "Over time, I learned that it was my choice how to react or respond."

In cases where things went wrong, he put into place a process for responding systematically and fairly:

As a "command and control guy" who was often frustrated by the process of delegating, Paul found himself working far more than was healthy. Steps to correcting this problem:

above: Paul and Nina (center) receive the National Remodeling Quality Gold Award in 2002.

"Start with yourself, your family and then your business," Paul said. With regard to the latter:

above: Nina and Paul Winans at their home in Ashland, Ore.