Nostalgia for the Hippie Building Heyday 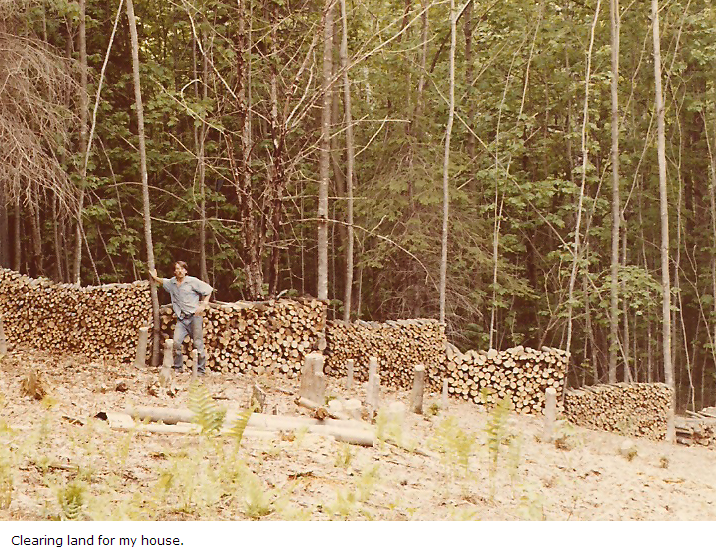 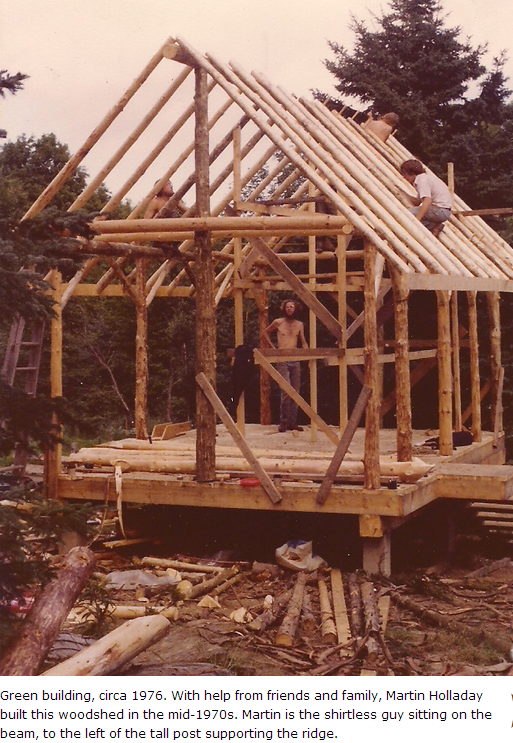 A discredited theory of embryonic development held that “ontogeny recapitulates phylogeny” — in other words, that the the developmental stages of an embryo (its ontogeny) mimic the stages of evolutionary development experienced by the species (its phylogeny). One piece of evidence supporting the theory: in early stages of development, a human embryo has a tail.

Those defending the theory pointed out that a human embryo starts out as a collection of cells; later, it looks like a frog. As it develops, the fetus may resemble other species; but eventually, when fully developed, the result is a human baby.

The recent wave of nostalgia for the hippie buildings of the 1970s — evidenced by Vera Novak’s blog on “The 1970s vs. the Millennial Generation” and Adam Cohen’s recent presentation at the Passive House New England symposium — led me to consider an analogy between hippie building and the discredited theory of ontogeny. Here’s my theory: each hippie family’s developmental odyssey mirrored five thousand years of residential construction history. To put it another way, “hippie building recapitulates the history of technology.” 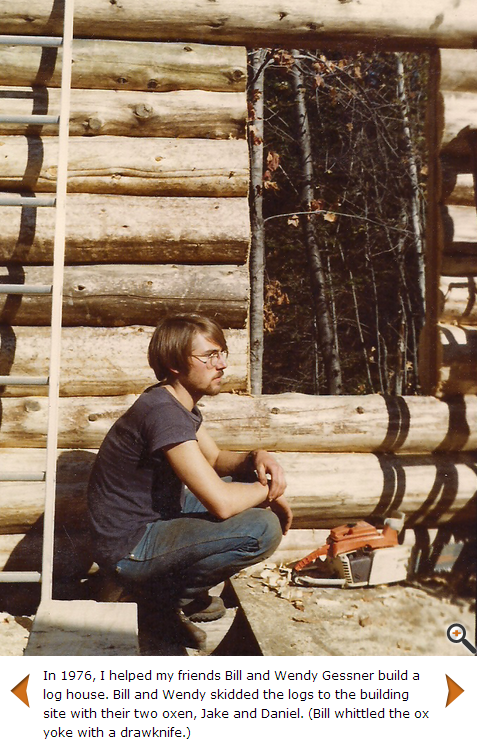 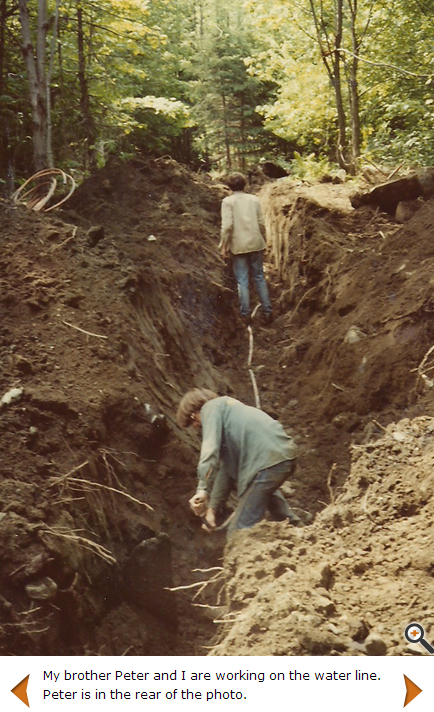 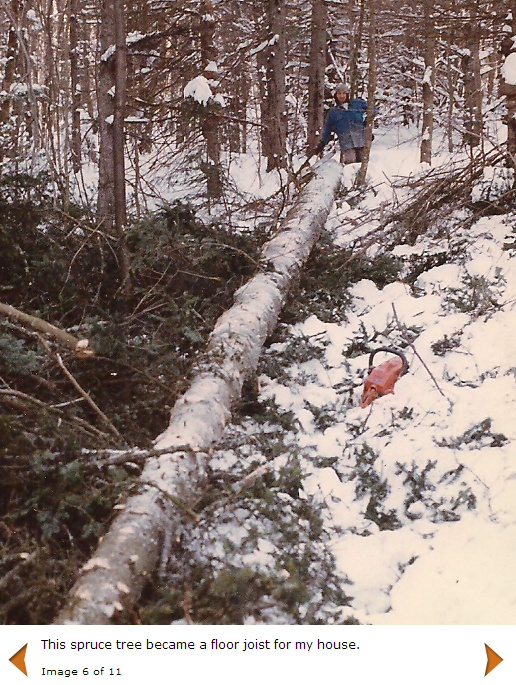 Sleeping on the ground
My own story may serve as a typical example. When I first moved to the land where I now live, I slept in a tent and cooked over an open fire. With the help of friends and family, the land was (very slowly) developed.

Since the road to our clearing in the woods was rudimentary, and our vehicles were patched together with baling wire and duct tape, transportation was often on foot or by ski. Our toilet facilities were the same as those used by backpackers: the woods.

Our first project was to build an outhouse. While the outhouse was under construction, we looked around for a source of water. Eventually we found a wet patch of soil in the woods. We dug it out with a shovel, installed an old barrel, and we had our first spring.
Later, we ran a hose downhill from the barrel, thereby re-inventing plumbing. Much later, we hired a backhoe to dig a trench between the spring and the house. We installed concrete well tile at one end of the trench, and a hose bib at the other. We backfilled the trench by hand.

Eventually, we built a one-room cabin on a foundation of wooden piers (old telephone poles). Since the cabin lacked a basement, the water pipe and drain pipe froze. During the first winter, our source of drinking water was melted snow. We used kerosene lamps for lighting.
A hand-dug septic system
Over the years, our technology improved. We eventually bought a photovoltaic module to charge an old car battery that powered a radio and a tiny fluorescent light.

Using a shovel, I dug a cellar under the house to keep the pipes from freezing, and we then had a sink with cold running water. By hand, I dug a hole for a septic tank, and built the tank myself out of concrete blocks and a homemade lid I fabricated from concrete mixed in a wheelbarrow. Using a shovel, I dug trenches for a leach field. Eventually, the house got an addition that included a water heater and a flush toilet.

Over the years, the PV system got bigger. I added an inverter and better batteries. Eventually, the old kerosene lamps were put away in the attic. 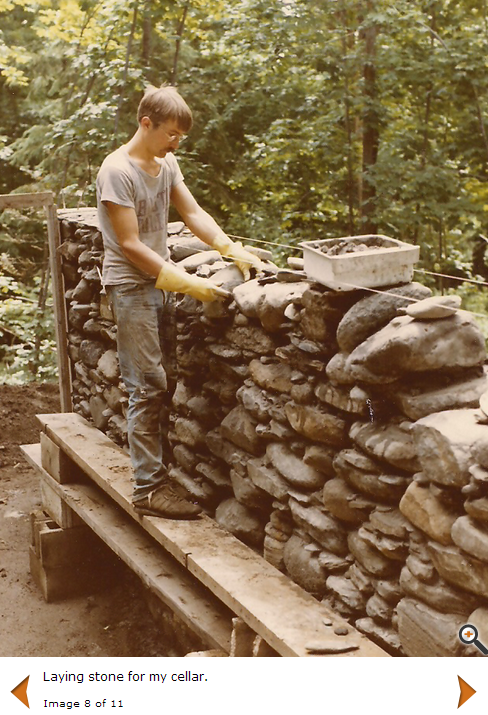 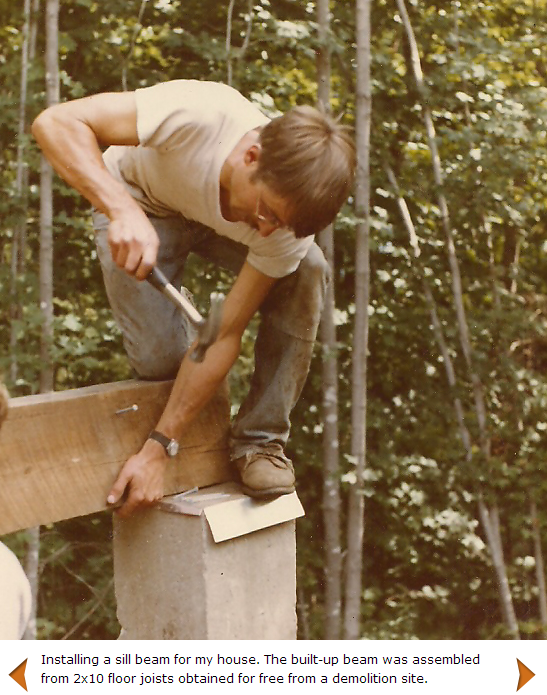 Were we green?
Were hippie builders engaged in green building? I suppose we were, although I've never been a fan of the adjective. To this day, I'm not sure what “green” means. If green building is a type of construction that has minimal environmental impact, we were probably fairly green.

Most of the back-to-the-land hippies of the 1970s were veterans of Earth Day. We organized recycling drives when we were in high school. We all read the Whole Earth Catalog and Mother Earth News. For advice on construction, we consulted Lloyd Kahn's Shelter and Ken Kern's The Owner-Built Home.

Since we had no money, we gathered our building materials in the woods and at the local dump. We didn't pay any utility bills, and we used almost no fossil fuels. When we were cold, we went out in the woods with a bow saw and cut some more firewood for the wood stove.

A few of my friends built log cabins, and later decided that they didn't want to live in the woods of Vermont. Their log cabins are now abandoned and beginning to compost. I think that the environmental impacts of their construction projects were very small indeed.

Of course, when I say that hippie homes were “green,” that doesn't mean that these homes would have scored highly with any green building program. These homes didn't even meet minimum building code requirements. Clearly, the first home I built (as well as the homes of all of my hippie friends) were miles away from compliance with Energy Star, LEED for Homes, or the Passivhaus standard.
The two legs of resilience
What’s the point of all this hippie nostalgia? Well, this reminiscing is relevant for anyone concerned about passive survivability and resilience — two of Alex Wilson’s favorite topics.
Resilience depends on two elements: appropriate technology and human behavioral flexibility. Hippie homesteaders have both, for the simple reason (“ontogeny recapitulates phylogeny”) that we were once frogs. In the old days, we slept on the ground and foraged for dandelions in the woods. In the early 1970s, after all, we all used to live like wild animals. So a few weeks without grid electricity (or PV power, for that matter) wouldn’t faze the average hippie family.

If the septic system backs up, there’s always the outhouse.
A backyard emergency shelter?
After Hurricane Sandy brought suffering to thousands of families in New Jersey and New York, several news sources reported that wealthy Long Island families were hiring architects to design small off-grid homes to be erected in the back yard, behind the family mansion. The idea was to equip this cabin with a PV array and a battery bank, so that the family might have somewhere to stay during emergencies.

In other words, wealthy families realized the importance of building a backyard hippie house. Who would have thunk it?

In an emergency, rural residents have an easier time
The lessons of hippie resilience aren’t particularly relevant to urban dwellers. Without grid power, urban life can get pretty grim. However, it never hurts to have plenty of extra food, candles, matches, flashlights, and quilts handy — even if you live in a Manhattan apartment.

If you live in suburbia, the lessons of hippie building may be more directly applicable. You might be able to keep a few hens in the back yard, or maintain a vegetable garden. And if your house has a tight shell and lots of insulation, you may be able to ride out an ice storm without worrying about frozen pipes. 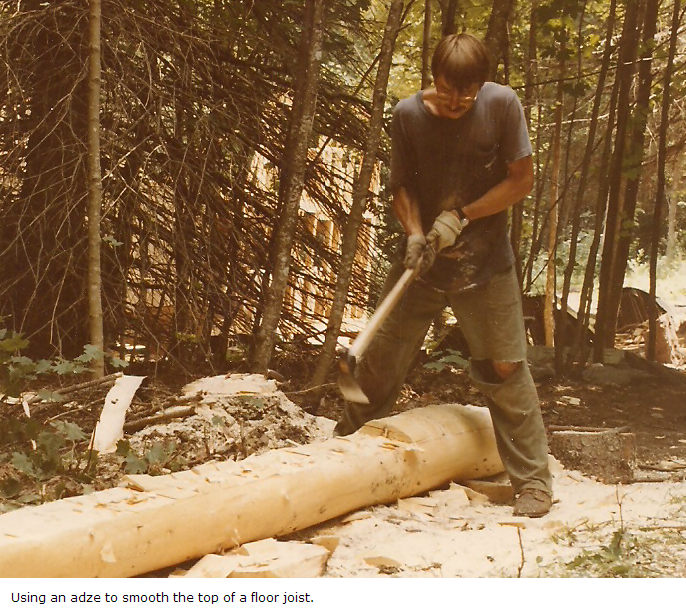 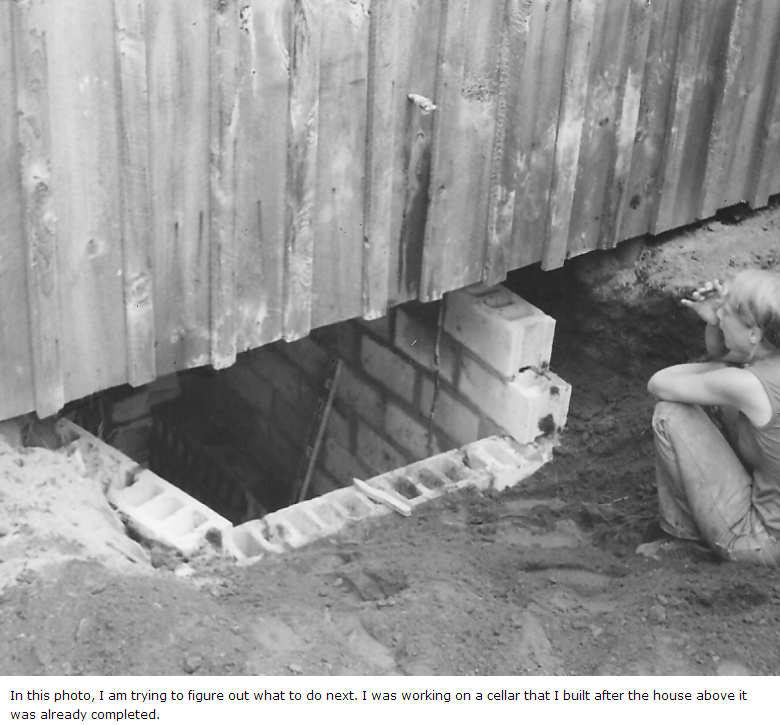 The creative explosion ignited by the back-to-the-land builders of the 1970s was memorialized by many photographers, most notably Art Boericke and Barry Shapiro, who produced a best-selling book, Handmade Houses: A Guide to the Woodbutcher's Art. In centuries to come, historians will probably note that the era of the hippie builder was the last chapter of a century-long period in American history — namely, the closing of the American frontier.

The most exuberant and delightful examples of the hippie houses of the 1970s were improvised and temporary. Similar homes are nowhere to be found in Provence or Tuscany, where stone farmhouses and stone barns are evidence of a deeper relationship to the land than was exhibited by the hippies of the 1970s.

While some back-to-the-landers moved on to new ventures after three or four years, others put down roots. If the descendents of these original back-to-the-landers feel as rooted to the land as the farmers of Europe, it's likely that more permanent homes will eventually be established than those that were thrown together with joy and improvisation in the early 1970s.

In some areas of the country, notably California, many hippie builders spent years battling local code officials who strove to condemn and demolish their homes. The tension between the ethic of the frontier — which Americans have often labeled “freedom” — with the requirements of settlement and community — in other words, the world of laws and building codes — is a recurring theme in our country's history.

With every passing decade, the American frontier is shrinking. Although I fully understand the importance of building codes, I can't help shedding a tear when I consider that the era of hippie building is mostly over.

Or is it? Certainly, builders of earthships and straw-bale houses are still with us, so perhaps the hippie ethic is alive and well.

Yet the definition of green building is no longer as simple as it once was. Forty years ago, our intentions were simple. We didn't have much money; we rejected corporate America; and we wanted our environmental impact to be small. These days, green building is more strictly defined; in most cases, green building programs require adherence to a long list of standards and performance benchmarks.

Time moves on, and there is no turning back the clock. I feel privileged to have lived during a memorable and joyful period of American history, one that was creative and unpredictable, and wish nothing but the best of luck to today's latest generation of green builders.